Project Description:
Hopefully in the future, people will look at a map and see the same amount of land aw we do today. Unfortunately, the effects of global warming on the Earth’s glaciers and icecaps are much more complex than just melting ice. Global warming is affected by a number of variables, but most of it is from pollution, which has dramatically increased the amount of carbon dioxide in the atmosphere, According to the Environmental Protection Agency, oceans could rise 0.9 to 1.5 meters by the year 2100. This would have a profound effect on cities as well as the oceans.
The island of Kiribati sits just 1.5m above sea level. Kiribati’s President Anote Tong predicts that his island will be uninhabitable in sixty years due to climate change. Kiribati is at risk of disappearing. Like many islands, Kiribati is in the unfortunate position of being most likely to suffer from the effects of climate change despite the fact that it has done little to cause it.
“No Land Country” uses ship-breaking, an occupation of many people in Kiribati, to create the system for it sown construction. The building complex is a floating island that acts as a ship recycling facility in which locals dismantle obsolete and wrecked sea vessels. When a ship has reached the end of its life cycle, it is broken apart and its materials recycled and reused in multiple ways. This self-sustaining island will complete that process, separating materials for the building itself, and at the same time creating artificial coral reefs from old ship parts. The project’s residences can easily adapt to the changing needs of inhabitants, growing or shrinking according to the changing size of the family, and each unit can be dismantled and reassembled in a new location. A the floating structure ages, its anchors in the seawater will come alive with sea life, allowing the structure to act as a living reef. 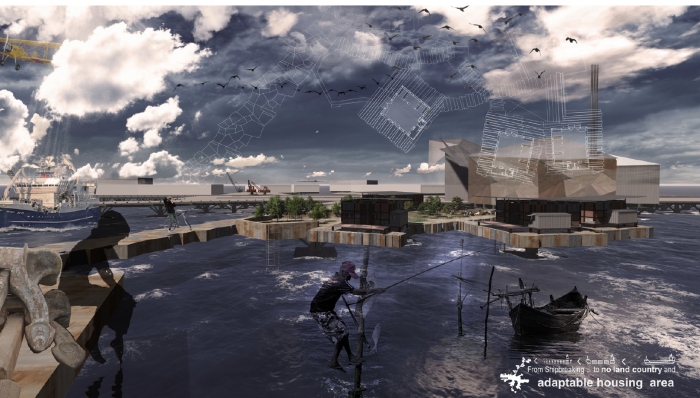 * ANY WORK (EITHER IMAGE, CONCEPT OR TEXT) CONTAINED IN THIS WEBSITE IS COPYRIGHTED BY THE AUTHORS AND CANNOT BE REPRODUCED IN THE ORIGINAL OR A MODIFIED FORM, IN PARTS OR AS A WHOLE, WITHOUT THE WRITTEN PERMISSION OF ALESSANDRA SWINY.